I last posted here in 2008, and have almost entirely decamped for Facebook and Twitter (I have easy-to-find public accounts at both), but it occurs to be that there may be people who still follow my LJ but don't read other social media.

In any case, I wanted to let folks know that my father, Irwin B. Berch, passed away on Monday, June 11, at Belmont Convalescent Hospital. He was 94. He passed very peacefully and had been attended by hospice for several days previous.

He was buried yesterday, June 15, at Hills of Eternity Cemetery in Colma, California, next to my mother who died in 1985. Here is his obituary, as printed in the San Francisco Chronicle:

Berch, Irwin B. March 31, 1918 - June 11, 2012. Passed away peacefully at age 94 at Belmont Convalescent Hospital in Belmont. He was married to the former Myrna Zeal from 1954 until her death in 1985. He is survived by his son Michael and Michael's life companion Maggie Osterberg, and numerous nieces and nephews and grand-nieces and grand nephews. He was born in Winnipeg, Canada, to Michael (Chaim) and Laura Sender Berch, but the family moved at an early age to Seattle, Washington where he grew up with his elder sister Belle and elder brother Julian, who preceded him in death. He graduated from Garfield High School and the University of Washington, with a degree in chemistry. At Washington he was a Phi Beta Kappa, a champion wrestler, and tried out for the 1936 U.S. Olympic Team.

In 1939 he joined the U.S. Food and Drug Administration, which became his lifelong career, with the exception of military service from 1942-45. During World War II he was in the U.S. Army Air Corps, and was sent by the Army to receive postgraduate education in meteorology, including a Master's degree from UCLA. He then co-founded the Army's Weather School at Chanute Field, Illinois, and trained many Air Corps meteorologists, and was preparing for service in the Pacific when the war ended.

Returning to the FDA, he became an expert on food safety and public health issues including product recalls, unsafe medications and "quack" medical devices, and consumer education and awareness. In the late 1940's he transfered to the Los Angeles office where he later became Chief Inspector. He met Myrna in 1952 and they were married in 1954. In 1964 he accepted another promotion, to District Director in the Philadelphia office, and resided in Cherry Hill, NJ. He received the FDA Award of Merit in 1968.

In 1971 he accepted a last promotion, as Regional Director of the FDA for the West Coast and Hawaii, the highest rank among FDA management outside Washington. He and his family returned to California, and settled in Burlingame. He retired in 1980 and lived in Burlingame until his final illness, participating in many community and charitable activities including the Emeritus Institute of the College of San Mateo.

Irwin was a loving husband, father, and uncle and was exceptionally thoughtful, well-spoken, analytical, and loyal to his family and to public service. He will be greatly missed, and remembered as a wise and ethical man -- a "mensch".

Burial at Hills of Eternity Cemetery in Colma on Friday, June 15, at 1 pm. In lieu of flowers, donations in his memory can be made to the Jewish Community Federation, 121 Steuart Street, SF, CA 94105. www.jewishfed.org.

I'm wondering why we haven't seen any ads focusing on McCain's role in the S&L crisis and the Keating investigation. Here we are in an analogous (and much worse) financial crisis, and McCain was caught influence-peddling last time around. Yet not a word of it in the news.

In theory the Democratic Party does not want to bring it up since four of the five senators censured by the Senate Ethics Committee were Dems, but those guys are not around (Cranston is dead, no one cares about DeConcini or Riegle, and Glenn is a beloved national hero) and more importantly, none of them are running for president in a time of national financial crisis. There's no reason for a 527 not to produce an ad hanging it around his head, black-and-white perp walk and all.

I really wish the Democratic Party would learn how to go on the offensive.

1. Take a picture of yourself right now.
2. Don't change your clothes, don't fix your hair... just take a picture.
3. Post that picture with NO editing.
4. Post these instructions with your picture. I liked the part about "don't fix your hair". Heh.

idle_kid_city
Your Favorite Series: One Last Go Round
If you could pick any TV show that has been off the air to come back for one more season, which show would you pick and why?
Reply 268

Hmmm, tough one. So many great shows gone before their time. Studio 60 comes to mind, along with Deadwood and John From Cincinnati. And from the UK, Life on Mars (although it apparently has a sequel).

I heard a loud noise in the middle of the night Monday night, and a foccaccia in a paper bag fell off the top of my toaster oven and onto the floor. I didn't think anything of it; figured it had been placed carelessly and was teetering on the edge. Last night, late in the evening, it fell off again, I replaced it, and I thought that was very strange. Then I went to bed, and at about 1:15 AM there were scrobbling sounds coming from the kitchen. I staked it out with my camera, and in a few minutes this little guy poked his head out from between a stove burner and its collar! 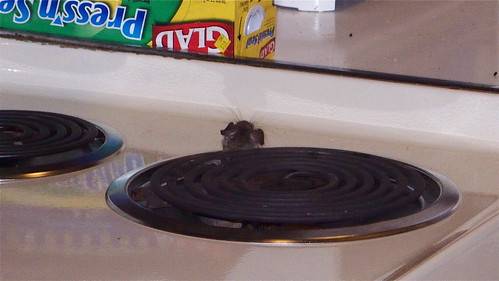 For a while I've wanted a camera which will be able to take telephoto shots of aircraft, wildlife, and scenery (which the baby Leica does not do), so I've been DSLR shopping. However, I still haven't decided what I want (or if I really want a DSLR at all). In the meantime I thought I'd experiment with carrying around a bigger camera again, which I haven't since my 1980s film SLR (Canon AE-1). So I picked up a Panasonic Lumix DMC-FZ50, which is a fixed-lens "long zoom" camera (35-420mm equivalent focal length) with a nice Leica lens.

It arrived yesterday and I took it to SFO on the way home from my dad's house. I shot about 100 pix, and it confirmed for me that it's a great camera, though possibly not quite up to the highly specific application I had in mind, though I'm still on the learning curve of finding the sweet spots in aperture/shutter speed/ISO. Haven't gone through the images yet to figure out what to post, but here's the camera itself:

It does have an eyepiece viewfinder (second LCD, not optical) which is slightly problematical with glasses, but I can just push them up and it's fine.

shaix did it, so I will too: